Imagebrief for Freelance Photographers; How and Why I Use It
https://youtu.be/HB0hUDo2XIA

ImageBrief is a tool that can provide value to freelance photographers if you know what to expect from it and how to use it. There have been many variations on this over the years and ImageBrief is only the newest flavor. The core concept of the platform is very simple. A company, ad agency, or creative director posts a brief that they need filled. Photographers can submit their photos to that brief. If your photo is selected for purchase, ImageBrief takes care of the payment and delivering the photo to the buyer, and then pays you. Why does this matter? Big companies have big processes, and big companies are the ones most likely to have a budget to spend on quality images for their publications and campaigns. For example, Conde Nast Traveler most likely won't purchase a photo from you directly, because you don't have a relationship with them. More specifically; you aren't a vendor that their accounts payable department will cut a check to. But; they will buy that same image from a company like ImageBrief who they already have a procurement and payment process in place with. ImageBrief is the agent who does this middleman stuff on your behalf. Of course they take a cut, but you make far more from this type of sale than you would from selling the photo as microstock.

Photography as a profession is facing challenges from advancing technologies just like many other industries and professions. A buyer can now crowdsource their images from capable photographers in remote corners of the world at a fraction of the cost that they used to pay to hire a photographer to fly there and make exactly the image they want. And if we're being honest, the creative director sometimes doesn't know exactly what they want. With ImageBrief; and other sites like it, that creative director can post a brief that may or may not be a fully formed idea and have professional photographers from all over the world submitting images that help them to 1) get ideas to refine their vision and 2) they are not obligated to purchase any of the images. I'm being a bit cynical. What ImageBrief is doing is a good thing. They match a buyer with a person who already has that image to sell. It's a win for everybody.

There are also briefs posted asking for someone to shoot an assignment. Sometimes a creative director is looking to hire a photographer for a custom shoot - they will pay someone specifically to shoot their brief to their spec. The budgets on those vary quite a lot. In just over a year of using Imagebrief I have seen only two of these with a large enough budget to bother trying to win the contract. I don't know how many photogs get hired directly through Imagebrief to shoot for a client but it does happen and that is another option to pursue if you're interested in adding some national brands and publications to your resume.

What Imagebrief is really doing is adding the brief element on top of the old stock agency model. In addition, the prices fetched for photographers images is far above what microstock sites pay out.

Why would I use Imagebrief if I'm not pursuing commercial work shooting for clients?

Sell images that I have already shot

I set up alerts on my account to send me emails and notifications when new briefs are posted in certain categories. I get alerts on briefs for travel, architecture, people, agriculture, landscape, lifestlye, action & adventure. I don't shoot all of those things regularly but I have a lot in my catalog from when I did shoot used to shoot for clients. I have the rights to re-sell those images. So if a new brief notification comes in, and I have images that might fit, I login and upload the images. It takes me about 15-20 minutes max; often less. I can also select from images that are already in my Imagebrief online catalog. In that case it takes even less time.

Imagebrief marketplace is very similar to what other stock sites do. Clients might purchase from images in the marketplace without ever opening a brief; just like they would on a stock site. You'll still be making more through Imagebrief than you would by selling the same image through a microstock agency. Occasionally one of your photos may be selected for a featured collection. Pay attention to the collections tab to see what they are featuring. I saw that they started an Action/Adventure collection so I uploaded some biking shots from my Morocco trip and one of them was selected and promoted.

What you are looking at below is what I see when managing my images. Below the image are a couple of notations. The "RF" means the image is Royalty Free and the "RM" means the image is Rights Managed. The little "MP" in the circle means that photo is available as stock on Imagebrief. Imagebrief doesn't select every image to be available as stock. That's fine by me. I still want the photos to be in here so they are protected by ImageRights and can be filed with USPTO which I talk about next. 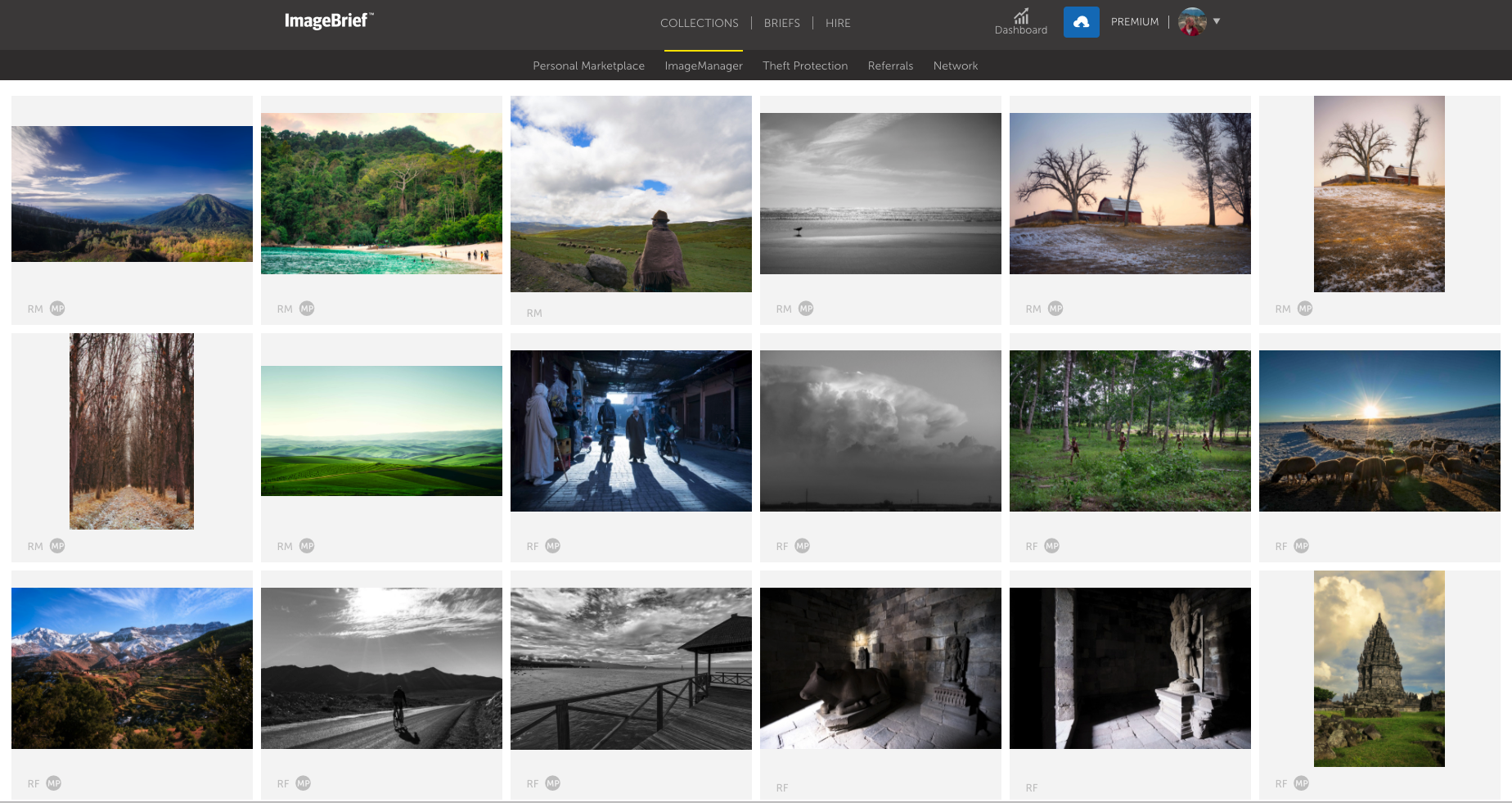 Sell my own photos as stock

You might have your own relationships with publishers, or someone who owns a website and they want to purchase an image from you. You can send them to your marketplace where they can pay with a credit card and download the image immediately. I also host photos on Smugmug but for some reason it's just difficult to sell images through Smugmug. It displays photos beautifully but doesn't feel like an online storefront. Smugmug is perfect for delivering a batch of photos for review or as download for a client and I used it heavily for client review when I was doing real estate jobs. For selling one image at a time, I much prefer Imagebrief.

The other big site that's popular for self hosting your own images to sell as stock is Photoshelter and I was very tempted by what they offer, but the decision to use Imagebrief came down to two things.

Here's what my marketplace looks like when I send a customer to purchase a photo. I'm not super thrilled with the organization tools Imagebrief offers, but the image search is excellent. Also, when I upload images, they are auto tagged so I don't have to painstakingly add tags myself. I do check the tags and add important details that the auto-tagging missed but usually it's pretty damn good. I cover that bit in the video.

I really hope Imagebrief keeps up their industry standard commercial pricing and doesn't sell out just to move more volume. Keeping prices at a place where we can afford to create and sell quality images is important both for platforms and for photographers. 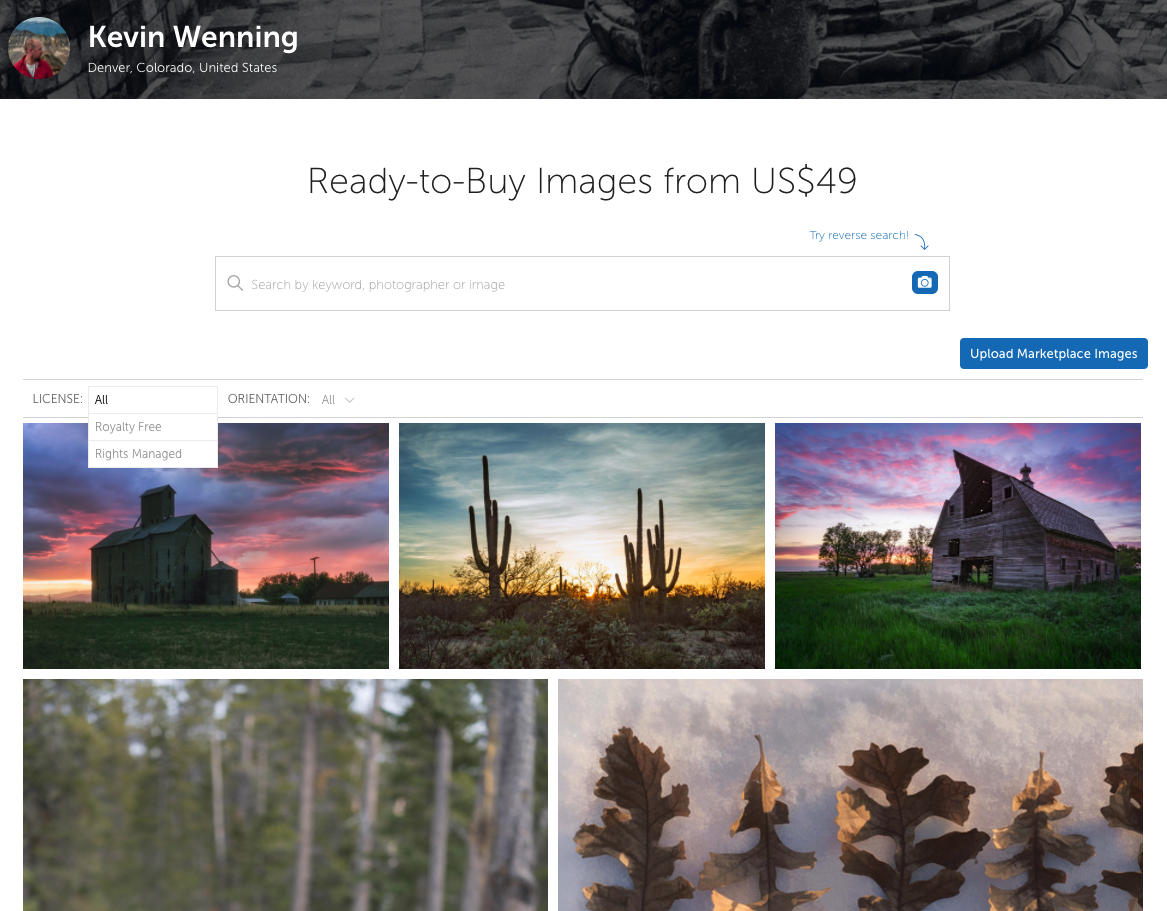 Monitor re-use of my images online and collect from infringers

Any serious photographer who values their time, and the integrity of their work will want to know if their images are being used without their permission. I'm no different. You can do a Reverse Google Image Search, which is relatively accurate but not perfect. And google's service only works for one image at a time; which, who has time for that. Next I tried Tineye which does roughly the same thing as Google reverse image search but with more accuracy at finding your images even if they have been slightly modified or resized. Tineye also offers batch image tracking and search but it takes some complicated setup to get that working. The best free service out there is Pixsy which finds your images and helps to recover fees for unlicensed image use.

The real value for me is in the partnership started in 2016 between ImageBrief and ImageRights. Any photos that I upload to ImageBrief are automatically protected by ImageRights. ImageRights will find your images anywhere they are used online and help to collect money from anyone who is using your images without your permission. I don't know how long these two companies will continue this partnership. I hope it's forever because the ability to sell an image and to protect it from illegal use are two things that all photographers have a hard time with. The marriage of the two is brilliant. I had no interest in paying for ImageBrief as a stand alone service, but with the addition of ImageRights I now pay $600 a year for a premium membership that includes Imagebrief and Imagerights. Imagerights costs $500 a year on its own so the two together for $600 seemed like a bargain. Coincidentally, as of writing this, Photoshelter costs $600 a year for their premium service which does not include theft protection, theft recovery or USPTO filing.

Considering that the average payout on Imagebrief is just over $300 US per image, I only have to sell a couple of images a year to make back my cost for the platform. I keep 100% of the image payout since I pay for their premium service. Also, as part of the premium service, I don't pay any recovery fees when I ask Imagerights to collect from someone who is using an image illegaly.

Here is an example of an image that is used without my permission and they certainly didn't pay me for it. Imagerights will either get the photo taken down or collect a fee for its use. If they collect, I get 55% of the fee they obtain. That's time and effort I don't personally have to expend to scour the internet for use of my images and enforce rights over my own images.

The best way to prove that you created an image is to file a copyright case with the United States Patent and Trade Office. This is not terribly hard to do, but it's not also not super simple. Here's a great article from PetaPixel on the steps to manually register your images with USPTO. ImageRights makes it very easy and straightforward to create a case and register images that you have uploaded to Imagebrief. This is just another perfect marriage of the two platforms and something well worthwhile to me. I won't go through the steps for filing a registration here as that really should be a whole post in itself. The point is to claim ownership of the images, and doing so makes it easier to collect from someone who is using your photos illegaly.

So as you can see, I only kind of use Imagebrief to sell images. Is $600 a year a steep price to do a couple of administrative tasks of that I could do on my own? Maybe; but consider these points.

In the recent years since I started taking my photography seriously, I have learned there is no one formula to being successful and there is no perfect platform to help you find clients, book clients, sell images that you shot on spec, and get paid. For the direction I am going; Imagebrief gives me the most comprehensive service to protect my work, make reasonable money from it, and give me back time to... be creative, enjoy family time, or spend an afternoon on my bike. 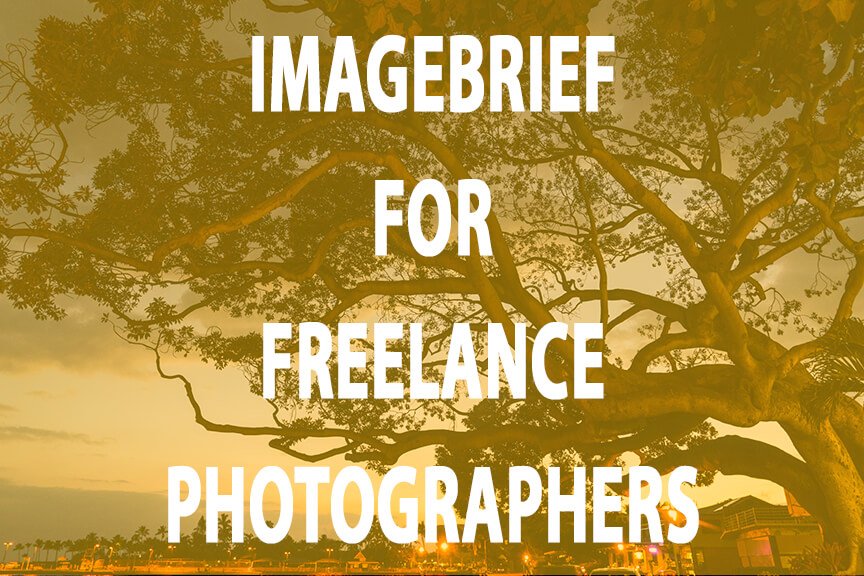 Subscribing to Notifications is the best way to get new content. I email a few times a year with bike and photo tour updates and the best new photos, posts and interviews.
4 Shares
Share4
Pin
Share
Share